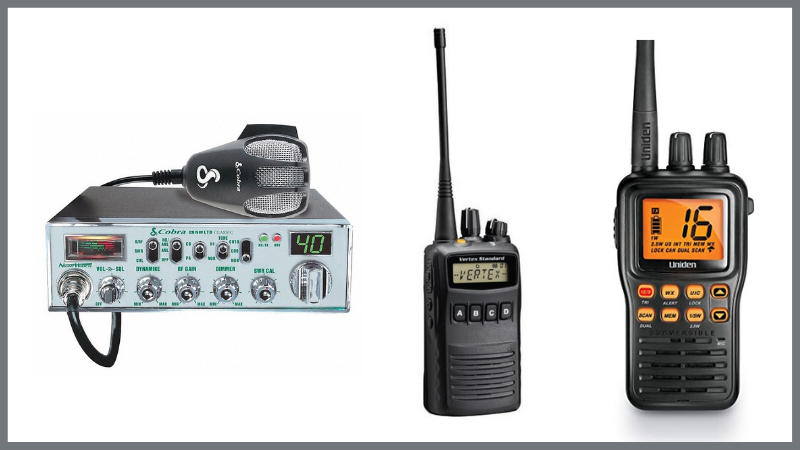 With all of our friends and family just a phone call away, we don’t realize the great invention of the two-way radio. But if you’re an adventurous person, you can surely appreciate this mechanical beauty. Where there’s inadequate network coverage, that’s where two-way radios shine the brightest.

People have been doing their homework for a long time, whether they should go for CB, UHF, or VHF. Today, we’ll try to give a straight answer to the whole CB Radio VS UHF VS VHF controversy.

These three radio systems come with their own sets of pros and cons. So, let’s take an in-depth look at them before making a final choice.

An Overview of CB Radio Vs. UHF Vs. VHF

While it’s best to read the entire post to get a good understanding of the topic, we understand that not all of you have the luxury of time to follow through. 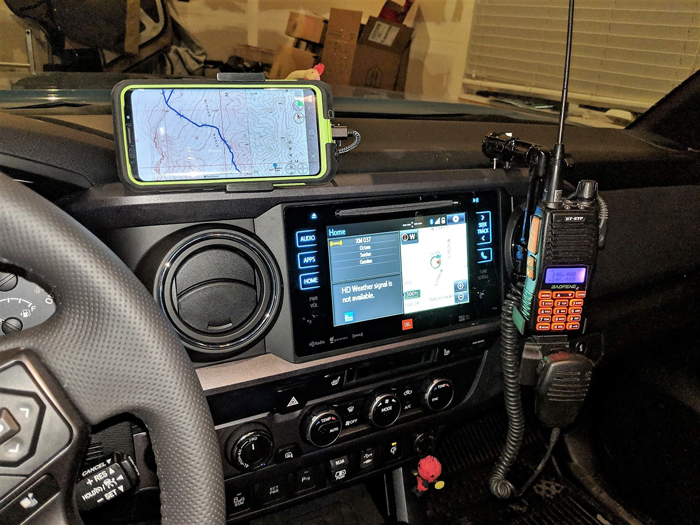 Therefore, we’ve prepared a tabulated section explaining all the information in short for those of you.

While both these communication devices serve similar purposes, they’re not the same thing at all. People use both these terms interchangeably, but they’re actually quite different. Let’s take a look at their differences. 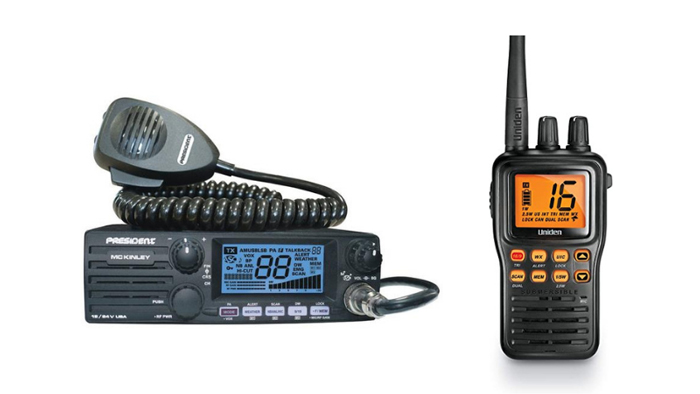 While both the communication devices are used for the same purpose, communicating, there’s a difference between their functionality.

CB radios are most known to be a part of the disaster preparations toolkit. Whereas VHF radios, also known as Marine radios, are mandatory for boating purposes. It’s in the name.

Another difference between the two communication devices is their main user base.

CB radio or the Citizens’ Band Radio is famous amongst truckers. Truckers mainly use this two-way radio for any traffic update or to keep in touch with the other truckers on the road. 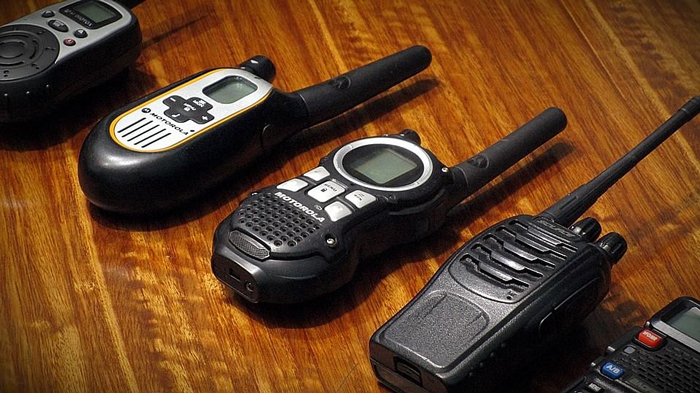 On the other hand, marine or VHF radios are primarily used amongst the marine to keep tabs on whether broadcasts, distress calls, and navigating their vessels. It’s the main form of communication amongst the mariners and other occupants of the sea.

Just as CB radios bear some dissimilarities with VHF radios, it also carries some with UHF radios. Let’s have a look. 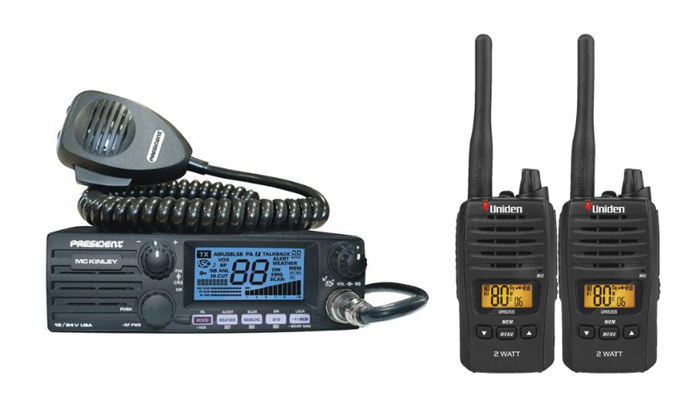 As you already know, the most popular use of CB radios is for calls during any emergencies. UHF radios have a different purpose. They are most common amongst various industry officials.

Moreover, UHF radios are the first choice for any public safety officials, thanks to their ability to overcome different barriers. That way, during any emergency, they don’t have to get restricted by any network barriers in their way. 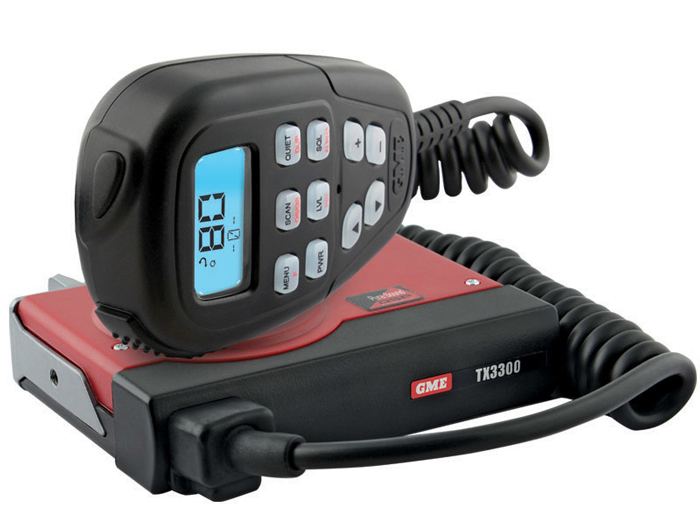 While both these radios have similar names, they carry some distinct dissimilarities as well. Here’s a breakdown. 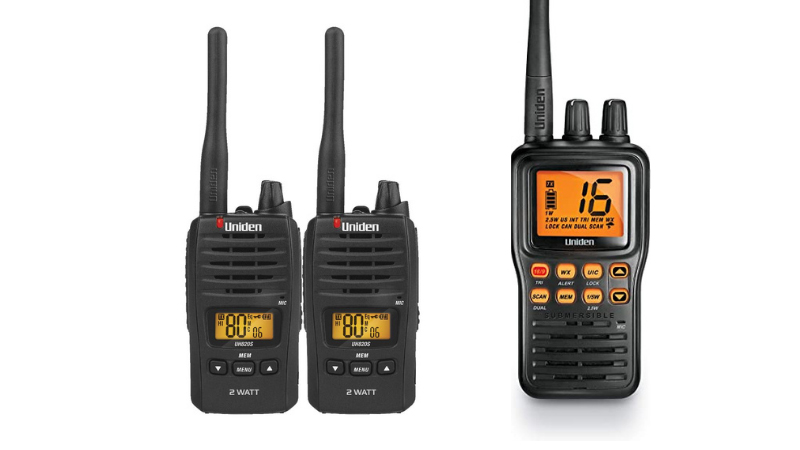 Although the UHF radios work as a means of communication amongst public safety officials, the mariners are the primary users of the VHF radio. In fact, VHF radios are a must-have for any water cruisers out there.

Since the radio bears no connection to the electrical part of the boat’s system, even in the wildest storm, the VHF radio can function quite well. 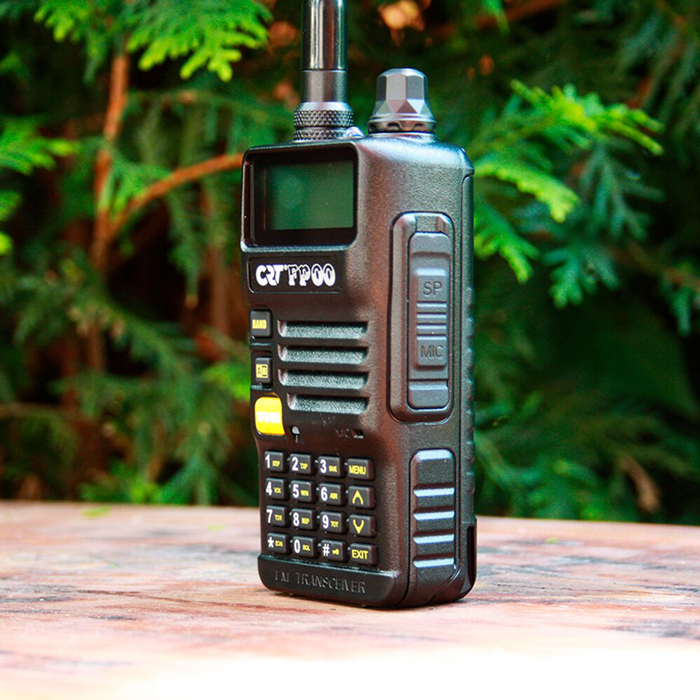 In the case of UHF radios, their ability to go through any type of barrier makes them the first choice of public safety officials. With the help of the UHF radio, the first-responders can communicate with the rest of their teams and keep everyone updated with the latest situation.

Just as zoom and google meet are all the rage nowadays, CB radios were the buzzword of the earlier generation. With some of the most exciting features and very reasonable pricing, CB radios were popular amongst all.

While its popularity has waned in the past few years, that doesn’t mean that it’s just an obsolete tech now. Instead, to this day, CB radios have held onto their popularity amongst their vast user base.

The Citizens’ Band Radio is commonly associated with truckers, but it’s popular amongst anyone on the road. 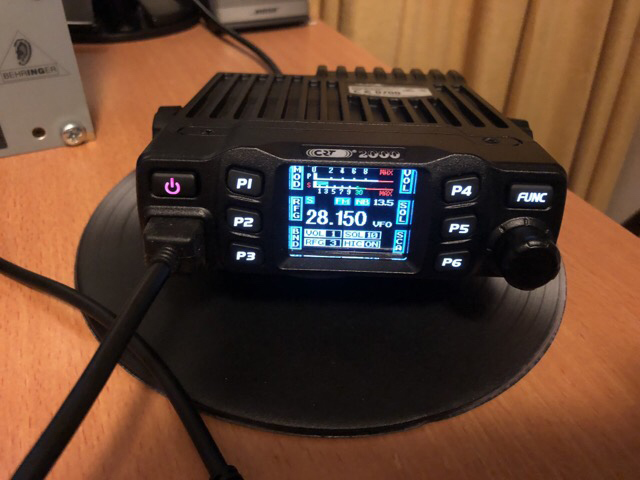 Operating on the AM and SSB band, the CB radio has a dedicated channel that reports on the latest updates of the road and other traffic-related issues. So, if you have a CB radio and you’re on the road, you don’t have to worry about which route to take. Just tune in to channel 19 in their band, and the news will come to you.

Another exciting feature of the CB radio is the emergency announcements channel. This channel is dedicated to delivering the users with the latest emergency news, which is why most boats carried a CB radio before setting sail. That way, they could stay ahead of any emergencies and take shelter if needed.

As stated before, you don’t need a license to operate a CB radio. However, there are a few restrictions regarding the use of a CB radio. 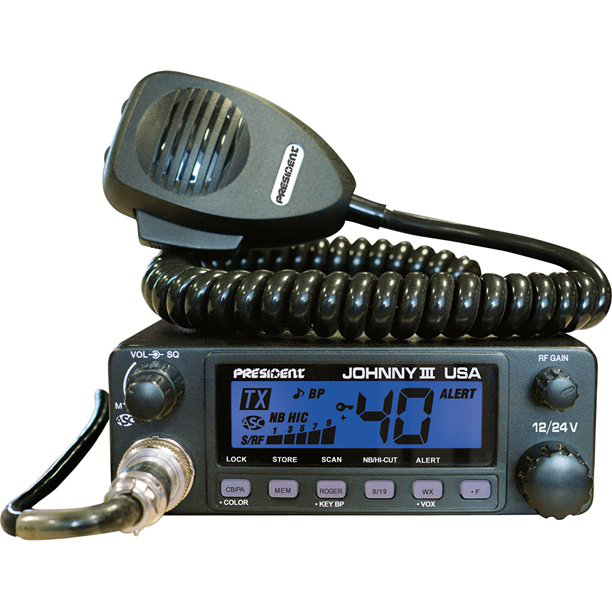 First, the FCC has forbidden the use of CB radios by any foreign government officer or representative. Additionally, you must comply with the order if the FCC has issued a cease and desist order against anyone using a CB radio.

It’s a good idea to have a CB radio in the car if you’re going to stay on the highway. Truckers use the Citizens’ Band Radio to keep track of any construction zones, road closures, and police stops. Besides these, CB radios are also suitable for contacting others if there’s no mobile network coverage. 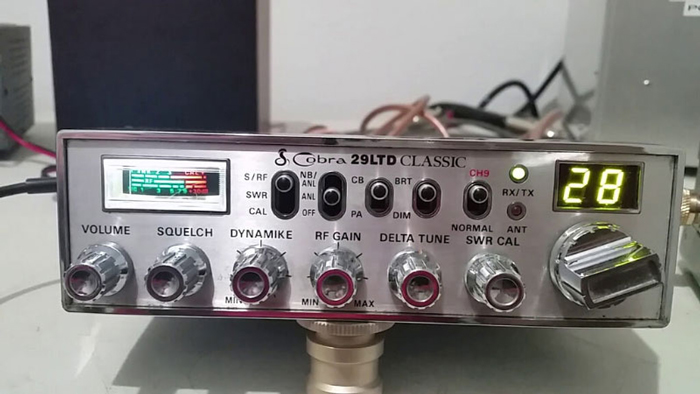 So, if you’re someone who stays on the road a lot or likes to go on adventures in remote areas, it’s a good idea to keep a CB radio in your travel pack for emergencies.

Thanks to its high frequency and shorter wavelength, UHF radios can work through different types of barriers, making them the first choice of public safety officials like fire brigade, police officers, and many more.

UHF is best suited for indoor uses with a wide range and the ability to go through different obstacles. Or you can use them around cities where there are buildings obstructing signals.

While other radio signals will be blocked by the concrete and steel barriers, UHF radios can pass signals through these obstacles without any difficulty. 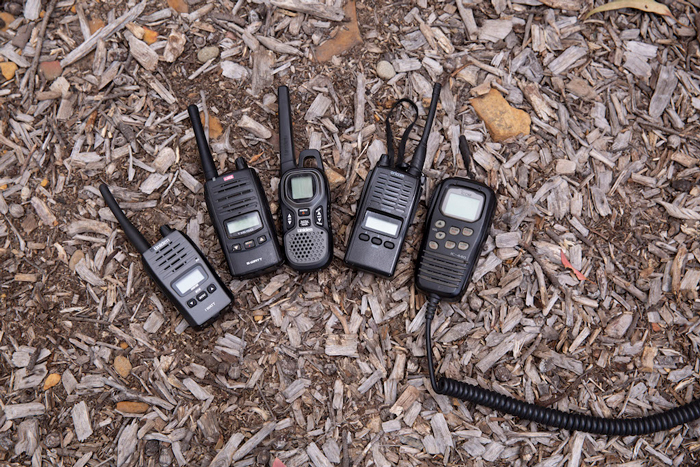 For example, if you’re a safety official working in the crowded hallway of a school, a long antenna may get in the way of your work. In such situations, a UHF radio works the best.

The Federal Communications Commission requires all UHF radio operators to be educated when it comes to legal requirements. Likewise, the users need to be educated to operate the radios correctly and not to end up interfering with others’ signals.

So, if you’re using a UHF radio, the FCC states that you need to have a license for such an operation. However, you won’t need any permit to buy the equipment. Truth be told, a lot of users don’t end up getting a license under the pretense that they simply didn’t know.

While the primary user base of UHF radios is public safety officials, it doesn’t hurt to carry UHF radio with you as a part of your emergency preparedness toolkit. As UHF signals can go through wood, concrete, and steel, you can send and receive signals during times of emergencies. 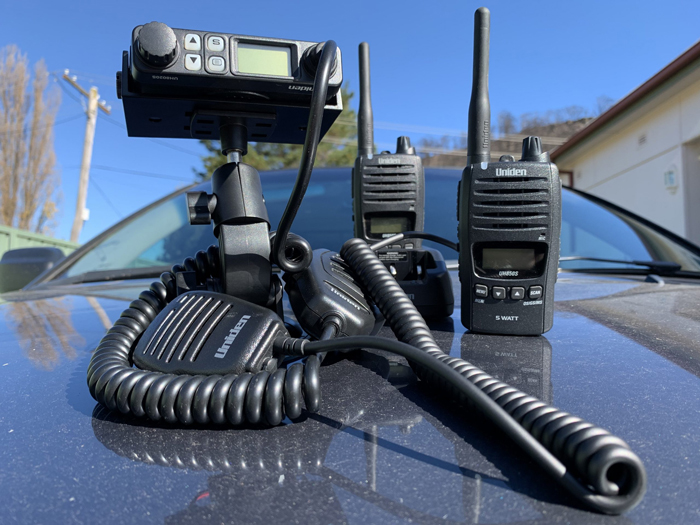 Of course, the term emergency refers to actual emergencies, as in life or death situations or something equivalent. You should never dial up your UHF radio to let your boss know that you’re not coming in today. Such careless usage can lead to you being fined or worse. So, keep it on you at all times, but use it carefully.

Maybe you’re planning a trip to clear your mind and relax. You may think you’ve everything you need but do you. But have you picked up your two-way radio? Of course, nobody wants to believe anything terrible may happen to them, but it’s essential to be prepared.

So, before you leave for the fishing trip with the boys, you better take your VHF or marine radio with you. Who knows? It may just save your life!

Like its CB and UHF counterparts, the marine radio also has a primary user base. You probably guessed from the name: marines. 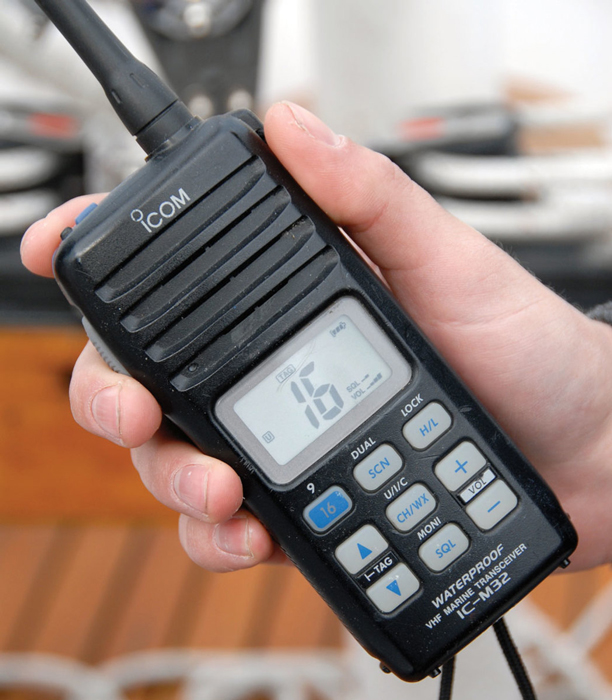 Mainly used for weather updates, distress calls, and navigating their vessels, the marine radio is perfectly suitable for the occupants of the sea. As the two-way radio system isn’t connected to the ship’s electrical system, the radio can still work even if a storm knocks out the ship’s power.

In fact, there’s a specific channel that’s dedicated to such distress calls. So if a mariner is ever in trouble, they just have to turn to channel 16 on the VHF band and ask for help. The channel is always kept free all day and night long to immediately respond to any potential distress calls.

If you’re just cruising around in the water just for fun, you can have a VHF radio on your boat for safety, and you won’t need any licenses. However, the FCC requires you to carry a VHF license if operating a larger boat and have employees on board. 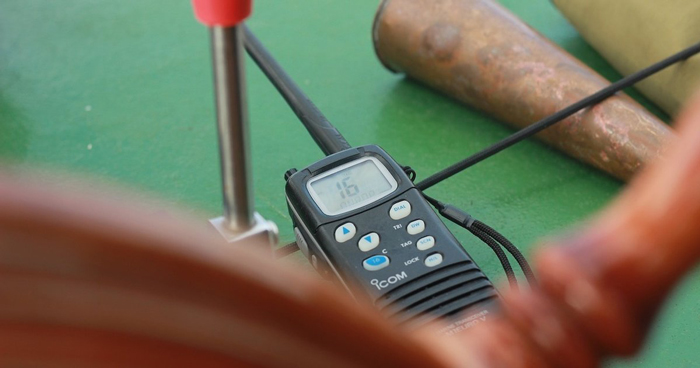 To get this license, you need to be able to speak English and be a resident of the US. After that, you’ll need to sit for multiple exams to get the license.

As a general rule, remember this, if you’re ever in the water, you need to have a VHF radio with you. The marine radio is crucial for saving your or anyone else’s lives on the unpredictable water.

Apart from emergency calls, the VHF radio is an excellent tool for navigating your ship safely. After all, you can never be too cautious, no matter how experienced you are. 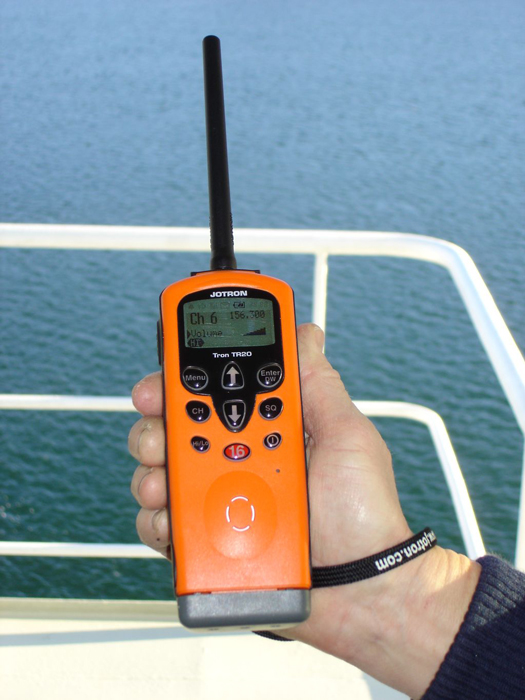 Just as channel 16 is dedicated to emergency calls, the VHF band has another channel dedicated to navigational purposes. The larger ships and boats announce their presence to other boats in this channel. That way, you can stay out of their way to not crash into them at any point.

That was everything on the CB radio Vs. UHF Vs. VHF. In a nutshell, CB radios should suffice. But if you’re expecting interferences, go for UHF radios. And if you want to use your device in an open space, VHF radios are the way to go. You will, however, need to get a license to use them.